How koji is produced on industrial scales 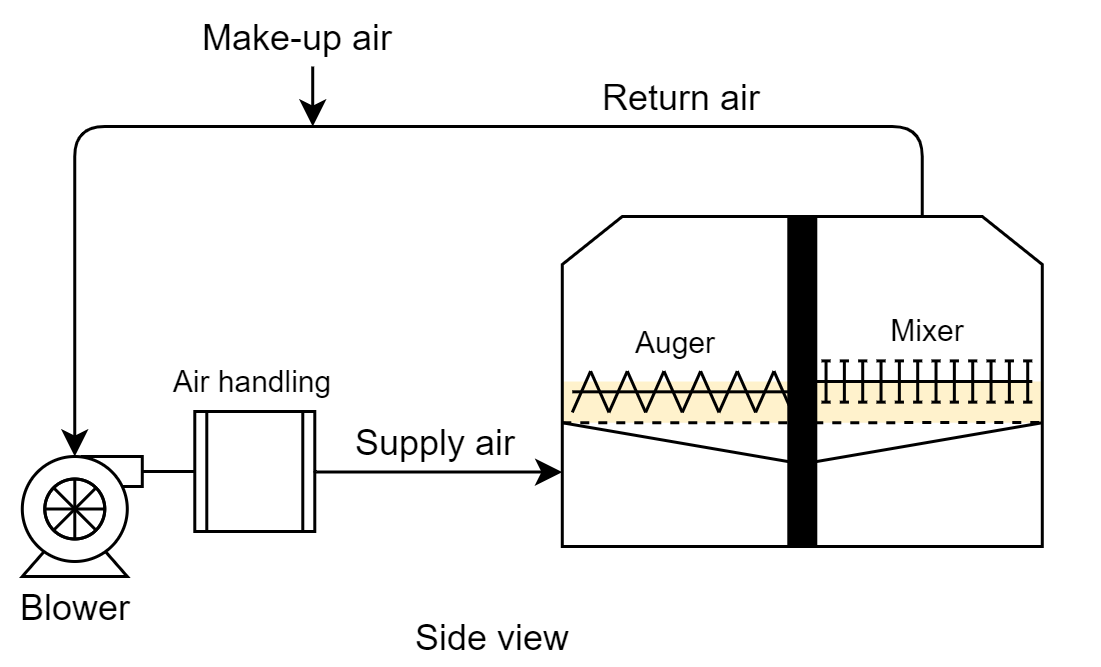 This post will provide a list of commercial and industrial koji fermentation equipment. It is by no means complete - I will update the list as I discover new equipment. A glossary of Japanese terms is available at the end.

In traditional koji making methods, cedar vessels are lined with cloth, filled with substrate, and allowed to ferment in a controlled environment called a koji room. The three main types are referred to as the “tray”, “box”, and “table” methods - the main difference being the size of the cedar vessel. Craft koji producers and traditional / semi-traditional shops still use these methods today.

Box method in a koji room - from www.nada-ken.com

Regardless of the method, the general process is the same: steamed rice starts on a table (or toko) where it’s cooled down, inoculated with koji spores, then wrapped up in a pile for the first 18 hours or so for incubation (1). After this incubation period, a process called mori is performed in which the rice is transferred to either: 2a) trays, 2b) boxes, or 2c) a ‘new’ table, which is similar to the first except it’s equipped with a wire mesh and adjustable slats.

It’s easy to see why these methods won’t scale: labour is expensive. These trays, boxes, and tables have to be loaded and emptied by hand. The koji itself, with no advanced process control, will heat up in the middle of the fermentation process and require mixing by hand to cool.

Modern koji equipment appeared after World War II, when Japan entered a period of urbanization and industrialization. For the koji industry, this meant that miso, sake, and shoyu production left the farmhouse and workshop to be aggregated into larger and larger factories. These methods will make use of modern materials, such as stainless steel and plastics, which are easier to sanitize.

Industrial koji equipment is typically classified into one of three ventilation configurations:

An example of a static flat bed: tent-type fermenter in a koji room - from hakuyoo.com

By blowing air through a bed of koji, a manufacturer can provide more oxygen and regulate heat transfer through a thicker mass of koji, making better use of floor space. Smaller fermenters are typically kept in climate-controlled rooms, so the blower only facilitates air movement. Larger configurations will have an air-handling unit attached to the blower, which facilitates temperature and humidity control. Some units are also equipped with a track-mounted mixer, which runs through horizontally through the bed of koji.

The static flat bed type is an all-encompassing term of various medium-scale koji fermenters, including tent-type, ventilated box-type, and “Castan”-type.

The multi-stage conveyor takes advantage of the koji’s different growth stages. In the first stage, the koji does not require much oxygen and also does not emit much heat. This means that it can be incubated in a thick static bed for the first 24h. Once the koji metabolism kicks into overdrive, it is spread thinly on a conveyor system for the latter 24h. They conveyor operates intermittently to mix and redistribute the koji itself.

I could only find one equipment manufacturer making this equipment configuration, so it seems to be rare.

In these unventilated type machines, the koji sits in a thin layer on a plastic sheet. Two large sheets of plastic fabric are stretched above and below the koji bed. These sheets prevent dust and pathogens from getting onto the koji, but they are still permeable to air and moisture. As the koji heats up, a natural draft forms which allows air to flow through the koji bed. Direct removal of the plastic mesh fabric makes this device easy to clean.

In drum-type fermenters, the koji sits on a mesh mounted approximately halfway between the edge of the drum and its centre axis. This mesh forms the bottom of a pentagonal housing that sits within the drum itself. Within this housing, two static mixers (metal rods with protrusions) extend along the axis of the drum. The drum is normally stationary, and is programmed to turn every so often to facilitate mixing. As it turns, the koji tumbles around and hits these mixers, breaking it up. Drum-type fermenters always have their own air handling unit. One key advantage of this type of fermenter is that some designs allow you to steam and cool the rice within the drum - saving one additional piece of equipment. Nevertheless, this type seems to have fallen out of favour in recent years.

This type of fermenter is commonly referred to as a “Tomuzetto” - I have no idea where the etymology comes from. My guess is an portmonteau of “tumble” and “set”.

Koji loading (left) with auger and mixing (right) - from www.hakutsuru.co.jp

In rotary disc type fermenters, the koji sits on a large, circular mesh disc that rotates along its vertical axis. An auger runs horizontally through the radius of the disc and facilitates loading and distribution of the koji into an even layer. A mixer also runs horizontally through the radius and breaks up the bed of koji as the disc rotates (at about ~0.3-0.5rpm). Note that rotary disc type fermenters always have their own air handling unit.

This fermenter scales incredibly well and dominates large scale facilities, such as those used by Marukome or Kikkoman.

I am glossing over three important topics here:

These are lengthy topics and I’ll address them in a different post.

It seems that drum-type and rotary-disc type fermenters, which are used at the largest scale, are typically reserved for shoyu, miso, and cheap sake. Quality sake commonly uses the static bed, multi-stage conveyor, or vapour exchange unventilated type. The exact reason is not clear, but I would hazard a guess that Sake koji is more sensitive to conditions are requires greater care, where as miso and shoyu simply need to produce as much enzyme mass as possible for secondary fermentation and aging.

Here are some great general information sites on the topic. Nada-ken has an english translation of all articles.

I also recommend Miso Production by William Shurtleff & Akiko Aoyagi. If you haven’t already encountered them, they are two of the most dedicated people when it comes to transferring Japanese fermentation technology to the west.

English literature on koji fermenters is sparse, at best. For those of you looking to conduct your own research, here is a glossary of relevant Japanese terms.

💡 Note 1: when describing a koji-making machine, "type" (式, shiki) is always followed by "automatic koji making machine / equipment" (自動製麹機 / 装置, Jidō-sei-kiku -ki/-sōchi). Note that like in english, machine and equipment mean the same thing in this context. For example, a full name would be "Rotary-type automatic koji machine equipment" (回転式自動製麹装置, Kaiten-shiki jidō-sei-kiku-sōchi)
💡 Note 2: many original equipment manufacturers (OEMs) will come up with their own branded names for equipment. You may see things like "NFT式", "VEX式", etc, but they will always fall into one of the descriptions described here.