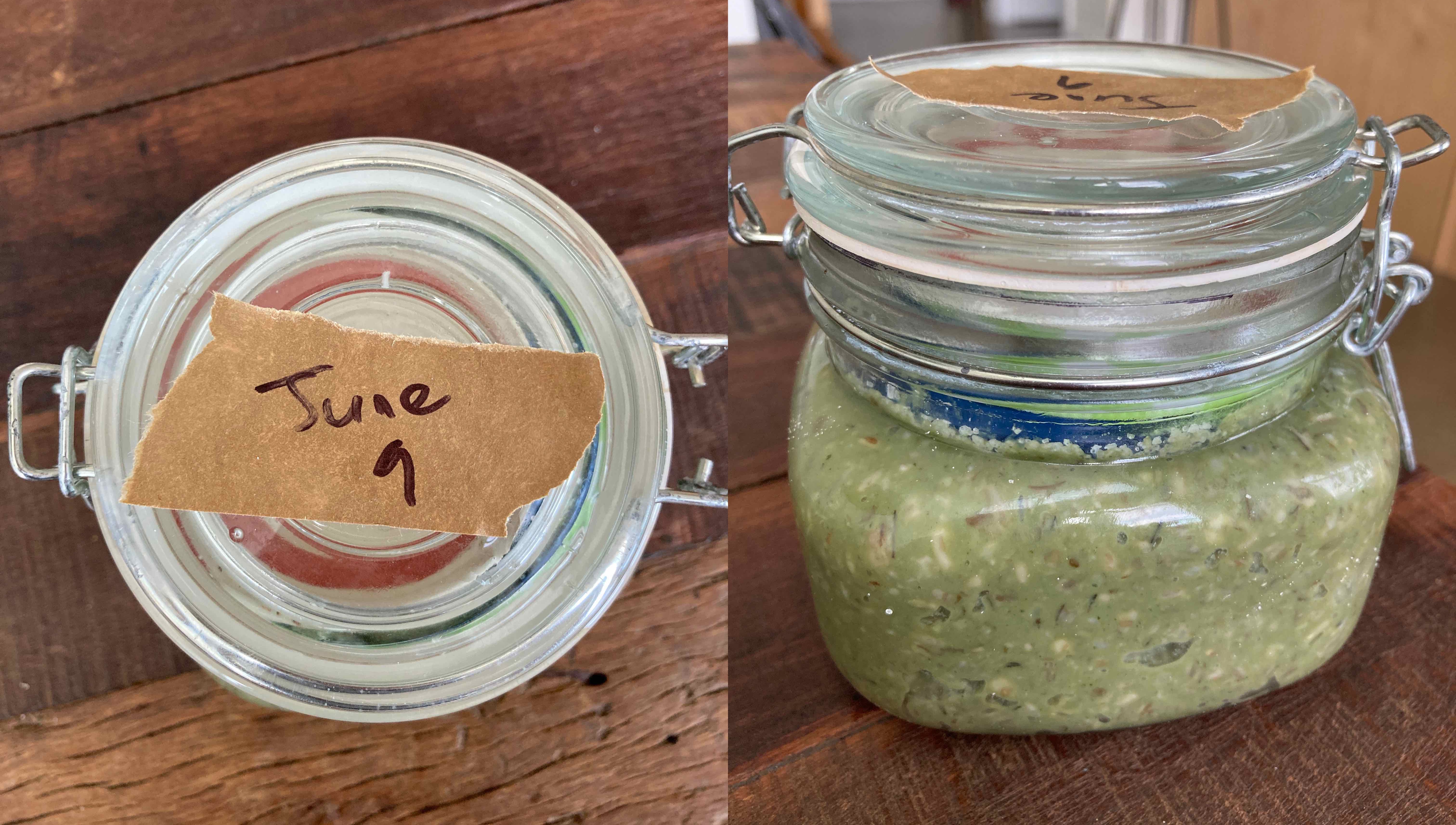 Miso is made up of [source of protein & carbs] + koji + salt. Traditionally, that [source of protein & carbs] is soybean, but modern misos use chickpeas, beans, mushrooms, or other interesting ingredients. Instead of looking at our grocery store shelves for new sources, let’s instead look small - really really small. Both yeast and algae are single-celled microbes that have a high amount of protein per gram of biomass, in fact it’s comparable to soybeans. Why not make a yeast & algae miso?

I had grown some kveik yeast for another, canceled project, so I decanted and partially hydrolyzed the yeast at 50-60℃¹. I had about 50mL of this yeast extract (think marmite or vegemite). Cultures of nannochloropsis algae are growing in my lab:

One of my Nanno cultures bubbling away. It’s normally not on the windowsill, but I’m using its normal home for another project.

I tried to flocculate them, but wasn’t able to for some reason². So I instead took a “boil-the-ocean” approach and literally boiled the water away until I had a salty slurry (similar to my outcome here), about ~100mL. I added them to a bowl, along with ~200g of fresh barley koji and some salt (the algae media had lots of salt in it, so I didn’t know how much additional salt to add. I added it “to taste”). Transferred it to a jar, and used the snap-lid plus some plastic lids to add pressure onto the miso. The initial taste was nice: an umami-rich, salty, fish/seaweed flavour. I’ll update this post as I taste it over the next few weeks & months.

I didn’t touch this miso much over the next 6 months. After opening it, it had a very unique taste: earthy, very sweet, and rich. It tasted like algae, but in a far and distinct way - hard to put my finger on it. Overall, a really tasty miso!

¹ There wasn’t a good reason to hydrolyze. I just did it for fun.

² Normally, I can flocculate algae by raising the pH to 12, but this didn’t work. I’m not sure why it didn’t work. The media contained the usual amount of magnesium, which is part of the flocculation mechanism, so my guess is that the algae culture wasn’t in a good state. FYI I brought the pH back down to ~7 using lactic acid.