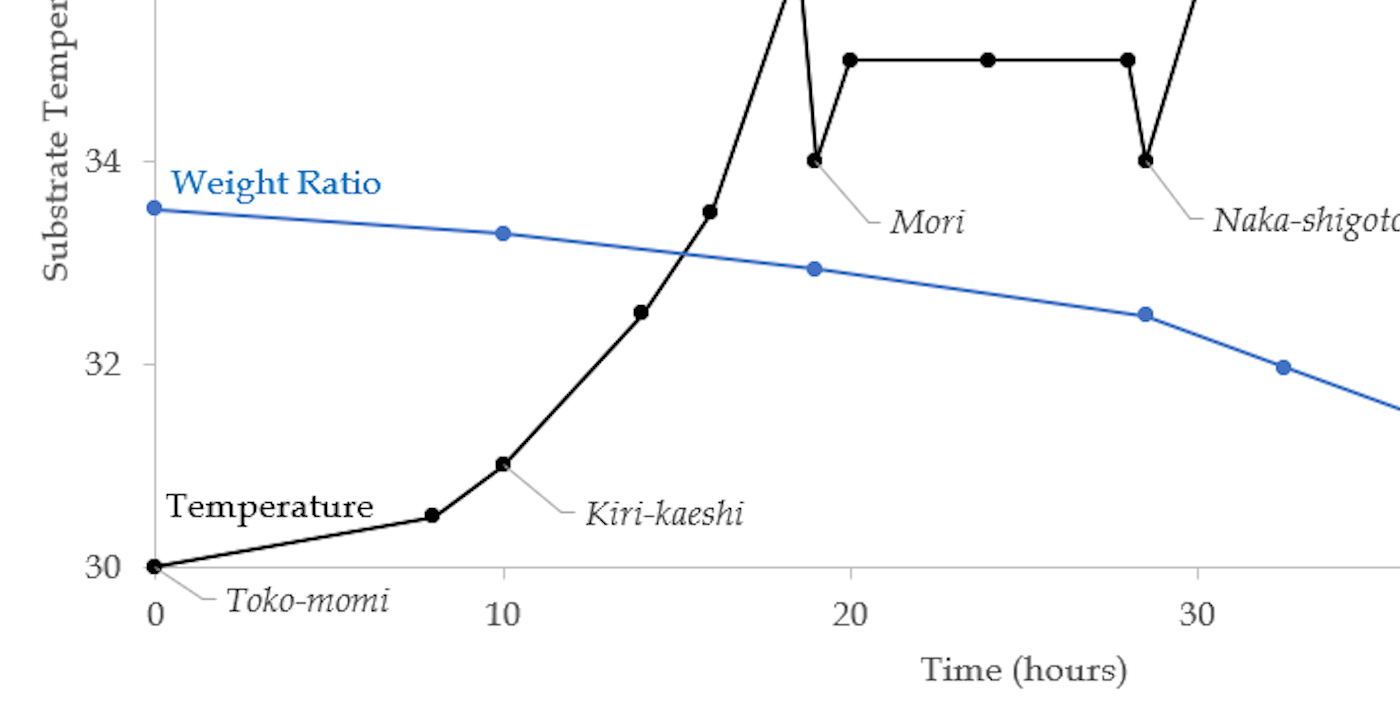 Koji generates a considerable amount of heat as it grows - if you’ve ever made koji at home, it’s almost unsettling to feel the warmth of a koji cake. Controlling that heat, along with water content, mixing, and ventilation, is crucial to produce a quality product. In this article, we’ll dive into how temperature and other factors are both controlled and exploited in the koji-making process.

This is an example of a temperature - time curve for sake koji. There are also different curves for mirin, miso, shochu, etc., and for different manufacturing methods, but the key concepts apply for all applications.

Note that this chart refers to the substrate temperature, measured inside the bed of koji, and not the room itself. But why is there such a complicated temperature progression? Can’t we just set a single temperature and walk away? To explain this temperature curve, there are a few things that need to be kept in mind:

I’ve already described the effects of 2. and 3. in a previous post, but in short: mycelial growth is optimal at 35°C, amylase is favoured between 35°C-40°C, and protease is favoured below 35°C. As for 1., a combination of mixing, ventilation, and adjustments to the bioreactor controls (for machine-made koji) removes heat.

Let’s annotate the temperature-time curve and add the names of the traditional processes to this chart:

The entire process can roughly be broken down into three periods:

The graph above is for sake koji only, which finishes at a high temperature to produce a lot of amylase and suppress proteases. I’ve compiled all the temperature curves I have here. Sometimes there will be only two distinct temperature phases if the temperature requirements of periods 2. and 3. are identical.

The exact shape and slope of the curve also depends on the koji-making method (more on methods here). Machine-made koji will have very accurate temperature control, while traditional and manual methods will show a lot more variability and rely on frequent mixing to bring the temperature down.

And lastly, temperature is just one part of the picture. As the koji progresses, two things need to happen:

Japanese brewers have a term called “haze” (pronounced like saké) that describes the state of mycelial growth observed on each grain of koji. The term is further distinguished into two concepts:

Koji with a high enzyme concentration must have good growth on the surface of the grain, within the centre of the grain, and have the proper moisture content. Brewers have different terms to describe the final product koji’s visible surface and interior growth:

For most applications, we are aiming to produce sou-haze, which has good surface growth and interior growth to maximize enzyme production. Tsuki-haze is also used in applications requiring good fragrance (such as saké).

It is also possible to achieve good surface growth and interior growth - but still end up with subpar koji. This is called baka-haze or “fool’s haze” - in which mycelial growth is visually good but enzyme yields are comparatively low. This is because the koji’s water content is too high, leading the inhibition of enzyme production via the glucose effect.

So, in order to achieve good mycelial growth and good enzyme yield, moisture needs to be controlled accurately.

Water, the Weight Ratio, and the Glucose Effect

Water has several important functions, and interacts with both temperature, growth, and enzyme production.

Up to a practical limit (i.e. never boil your rice) growth rate is always proportional to water content, and high water content encourages the germination of koji spores.

However, a high water content also inhibits enzyme production. The reason for this is two-fold. Firstly, there is a mechanism called the glucose effect (which is a misnomer, see below). In the presence of abundant glucose, the genes encoding for amylolytic enzymes are switched off. This is a smart adaptation by the microorganism: if there’s already a lot of glucose, why make more enzymes? Secondly, higher levels of moisture increase the activity of enzymes. This is a common effect across all enzymes.

So, in the presence of plenty of water, enzyme activity increases, and the koji’s enzymes end up liberating lots of glucose from the starchy substrate. The glucose is transported back to the koji mycelium, and this triggers the inhibition effect.

💡 The formal name for this process is carbon catabolite repression, which is common to many micro-organisms, not just koji, and the mechanism can occur with other carbon sources, not just glucose. There is also an opposite regulatory mechanism: the koji will produce more amylolytic enzymes in the presence of maltose and oligo-saccharides. I'll take a detailed look at these and other mechanisms in the future. Also, using some genetic engineering - some of these mechanisms can be deleted or altered entirely.

Finally, recall that rice koji can generate up to 7kcal/kg/hr during the peak of its growth - meaning that without heat removal, the koji’s temperature can increase by roughly 7°C in a single hour and the whole batch would be cooked in under 2 hours. Thankfully, with adequate ventilation heat can be removed by evaporative cooling (the latent heat of vaporization of water is 578kcal/kg at 34°C). In a single hour, the heat generated by 1kg of koji can be removed by allowing roughly 12g of water to evaporate.

Of course, some of the heat is removed by other mechanisms, like convection and conduction, but it can be shown that the majority of heat removal comes from evaporative cooling. It can also be demonstrated that evaporative cooling is the limiting factor when it comes to air supply for koji growth - more so than oxygen requirements or carbon dioxide removal. More on this in another post.

To keep track of the koji’s moisture content, brewers simply weigh the steamed rice or koji, at whatever stage it’s at, and calculate its weight ratio:

Note that this is not exactly the same as total water content, since white rice already contains 10-15% moisture, and the koji’s metabolic processes also produce water. In reference to soaked and steamed substrate, it is also referred to as the water absorption rate or ratio.

The weight ratio is usually measured at these key steps. The values for sake-koji on short-grain rice are provided here - for other applications, see the end of this post.

Here’s how the water content progresses during each period of growth:

Chapter IV of Koji Studies sums it up nicely:

It can be said that the mystery of making koji is “to harmonize the drying rate of steamed rice with the growth rate of koji.”

How much of this matters? Commercial Koji vs Homemade Koji

For home koji makers: just focus on growing koji before worrying about optimal enzyme yields. However, the reference weight ratios and temperatures can be used to help troubleshoot the process.

One of the reasons commercial producers are so meticulous about these parameters is because it affects their product quality and bottom line. Koji takes more time, labour, and energy compared to the application’s non-koji ingredients, so a good enzyme yield is key. For those of us making koji at home, if enzyme yield is low, you can compensate by just using a comparatively high amount of koji. If koji grows too slowly, we can just wait longer.

I also suspect that because commercial producers are dealing with larger amounts of koji overall, their production is less susceptible to moisture loss, and more susceptible to huge swings in temperature (more koji = less surface area per unit volume).

I’ve posted all the temperature curves accumulated to date here:

It includes curves for sake, miso, mirin, shoyu, and shochu. Again, shoyu and shochu work slightly differently than described in this post but I’ll look at them in detail another time.

Here is general table outlining the temperatures and weight ratios for different applications.

**For shochu, some values need to be confirmed. There are additional substrates not listed here. There may also be a difference between the two grades of shochu (continuously distilled 甲類焼酎 and single distilled 乙類焼酎) - to be confirmed.

Here is a list of Japanese terms pertaining to the koji-making process. This can be used in conjunction with the reference temperature curves. Some terms were not covered in this post - but I’ve explained them briefly here.